Currently one of my personal favorite artists, Anuhea just set off on her first headline world tour, kicking it off this week with several shows in California before heading out to SXSW in Austin, TX and on to other parts of the US. Her complete updated tour schedule can be found on her facebook events page by clicking here.

I was able to catch up with Anuhea and get the inside scoop before she left:

What's your favorite part of touring?

I love the traveling, getting to see all the different parts of the world. Hawaii is beautiful and I love living here, but it's really cool to perform in little towns all over the country and getting to meet the different people in the world and try new foods.

You posted a comment on Facebook a few weeks ago that your little sister is coming on tour with you. Is she going to perform with you or just come along for the ride?

She's coming along in the bus with us. She sings as well, but she's shy and always says to me "you're the singer". I'm trying to bring her out of her shell a bit. She just turned 21, so she's finally able to come into the clubs and VIP areas with us. My brother has been doing my merch for years, so I've always had him with me, but it's great to have her along with me too. I love having my family with me. It helps me not miss home while i'm on the road.

Last year, you toured with one of your best friends, Kimie. How did you come to bring Justin Young with you on this tour?

I've always been a huge fan of his. I grew up listening to his music, as he is really popular on the islands. I never thought he'd be opening for me. 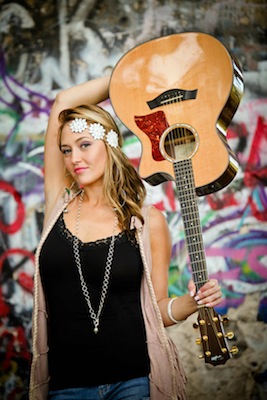 Is there a specific show or city on the tour that you are the most excited about?

I'm really excited for SXSW. I love Austin. It's the live music capital of the world. We did some recording there and it's such a great city. The first year I went to SXSW, before my first album was released, I was able to pass out my demos to a bunch of people and do alot of networking. It's a great opportunity. And last year I went with The Green. It was really great to be there and represent the people and music of Hawaii. I'm really excited to be going there again this year, and it's a great way to start off this tour.

What was your "big break"? Was there a specific show or festival that was a turning point for you in your career?

I don't think I've had a "big break". The release of my second album was big for me. We released "For Love" using a Kickstarter campaign and it just blew up. I got alot of exposure performing with Jack Johnson at the Kokua Festival. It was amazing for me to be able to perform with him. He's always been my idol.

So Jack Johnson is the artist that most inspires you?

Yeah. He does the singer/songwriter acoustic thing and is my biggest inspiration for what I do. We would finish surfing and go back to the car and put on Jack Johnson and hang out the rest of the day.

I caught your show at The Independent last year. You have a great way of being relaxed on stage and making the audience feel like they are in your living room with you. Is there a trick to that?

Thank you. Not really. I try to laugh and make fun of myself before anyone else gets a chance to. I love doing the contests because they bring me closer to the fans. We did the Mr. Mellow contest on the last tour and I had a lot of fun doing it. The "Awkward Shaka" contest came about the same way. Just having fun and laughing at ourselves.

More details on the "Awkward Shaka" contest, where fans can submit a photo of their "awkward shaka" for a chance to win VIP package tickets to any of her upcoming shows can be found on her website at http://anuheajams.com/blog.asp.

She just finished filming the video for her latest single featuring Tarrus Riley "Only Man In The World". The video is expected to be release in about a week. In the meantime, you can listen to the song on YouTube by clicking here.