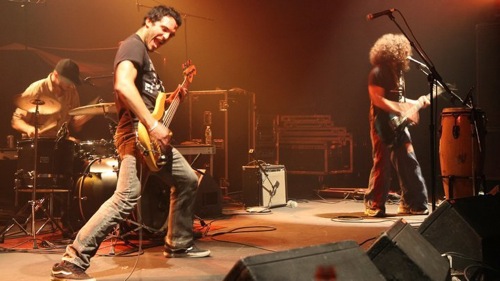 You can categorize Among Criminals in a few different genres. Please do your best to give us the best definition of the band?

"Our name stems from the fact that we all live Among the Criminals of this country’s past and future governments."Alt-Rock, AfroCuban and Dub. That’s my best! Believe it or not that answer took the longest. ha!

What is the ultimate drive behind the band? 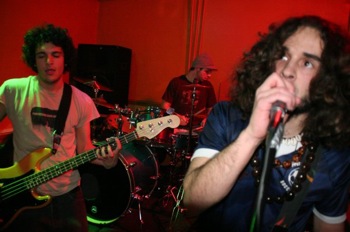 To make music and reach as many people as we can. There was a time I wanted to be a club band, maybe hit overseas, but the further along we get the bigger and bigger we’d like to be. The bigger we get the more money gets donated and the more we feel we can impact positively even just through attitude and lyrics.

Among Criminals is a band that is highly charged on the message and lyrics. When putting together a song does the music sometimes help create the lyrics or are they already written out?
I (Ryan) and the band have attacked songwriting from all different angles. If I have something written I'll try and form something around that. Use the words to create the sound. Or we’ll all write something and I'll hum a melody, and using that sound see what can fit lyrically. Though it is tough for me to step too far away from political or philosophical writing for too long.

What are the two top songs of yours you want people to concentrate on the lyrics the most and why?

2 new songs off our coming album. One of is called “This Is Our House”. Nothing political, just a very interesting story. And the next is “Tear Is All Down”. A song about letting all your beliefs go, and see what really matters to you. Basically an anti organized religion song.

How Among Criminals are we?
Haha. Our name stems from the fact that we all live Among the Criminals of this country’s past and future governments. We don’t deny it, but we do our best to make changes. We are very much the corrupt cop roaming the streets these days.

The band is based out of Philadelphia. What is the music vibe down there like?
Maybe we’re just in it so much, but the Reggae Rock scene is pretty awesome down here. Hardcore is always around which is awesome and there is a huge folky bluegrassy acoustic scene as well. Maybe its due to WXPN, which is centered on the Folk genre a lot.

A new album is in the works for you guys, what can we expect off of this new record?
Actually the songs are more experimental but also shorter. Seems like we got right to the point on this one. It should open doors for new listeners. Reggae has started taking a back seat with the band since we started. Its always there, but sparingly and tastefully. We drew from a lot heavier influences, and it sits well with us. Latin and Dub are there, but there really isn’t a “token” song. We just let the album happen.

What have been the biggest highs and the lowest lows in the bands history?
Losing a lot of money on a broken down van was one of the lows. We are all pretty emotionally stable dudes. No fighting, no going on stage mad. Its not all laughs and lollipops but we are all friends. Highs would have to be playing these bigger shows this last year. State Radio, Jello Biafra of Dead Kennedys, and SOJA were very much a pleasure to rock the stage with.

Any final plugs or mentions?
Our CD will be released on January 7th! Keep an ear out as we leak the tracks on facebook. Thanks so much everyone for your support, we love you all!