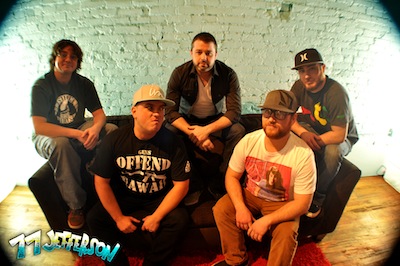 77 Jefferson singer Joel Castillo catches up with Musicbailout to share thoughts on the band’s development and Rarities Volume 2 - the newest from this Kansas City-based reggae quintet set to release on May 12th.

I’m thrilled to hear you are currently in studio finishing up Rarities Volume 2 – what motivated the songwriting on this album and what kinds of threads are consistent throughout the tracks?

Joel: The most fun thing for us on a Rarities album is that we don't have to stay consistent or stay within a certain theme or feel. Before, during, and after recording ‘Truth & Love,’ these songs and ideas would pour out but maybe didn't quite fit the theme of the current project. This gives us a chance to put these songs out and have a lot of fun doing it. The motivation for the songwriting on this album really stays the same for us right now. It's just real life and things that inspire us. For me, it always seems to be based around love, which is not necessarily intended. But, I'm fine with it, and so far, our fans seem to enjoy it as well.

Share some about how Rarities Vol 2 builds upon the first volume and in what ways is it set apart from Vol. 1 and other 77 Jefferson albums?

Joel: The idea of the original Rarities was to put together something that had a wide range of sounds as far as beats, dubs, acoustic tunes, remixes - something that felt like it wasn't all recorded in one studio session, but in different studios and at different times. Something that sets this one apart from the last Rarities is that we are featuring more special guests than we ever have on an album before. There are a lot of people that we would love to work with that we are friends with as well as fans of, and we are getting the chance to do that with this album. And, it's feeling very natural. I really think people are going to enjoy the collaborations, and, if they don't already know the artist, they will definitely be a fan after hearing their verse. 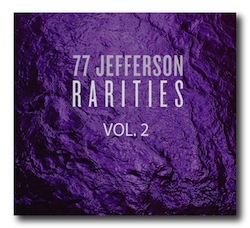 You’ve released a video for Likkle Bit featuring Spawnbreezie, whose voice adds such great soul to the song. You’ve historically collaborated with other artists, such as Josh Heinrichs. Which other musicians are featured on Rarities Vol. 2, and what other bands you hope to collaborate with in the future?

Joel: Definitely! Besides Likkle featuring Spawn, we are collaborating with Cas Haley, SkillinJah, Jah Maoli and, of course, Josh Heinrichs. This will be our third collaboration with Josh, and it's always very fun and natural to do a song with him. Rarities 2 will also have a lot more of our co-singer Justin Howard, who joined up with 77 in 2012 along with Kyle Crouse on bass. This will give 77 fans an opportunity to get to know Justin a likkle bit more. As far as in the future, I know all the boys probably have a different idea of someone they would like to work with, and for me it's very hard to say. There are so many amazing singers and musicians that inspire me be it reggae or not. I could just go on for hours.

There’s a distinctive quality to the reggae of this region, and I so appreciated the winter backdrop to the video for Likkle Bit. It’s a rarity to see a winter jacket in a reggae video, and as a Chicagoan, I loved it. How do you generate such a striking connection to a reggae vibe in the throes of a snow-filled Midwest winter?

Joel: We embrace it, use the changing of the seasons to our advantage. It's like you can feel the mood of a song differently under a dim lit winter sky, as to other songs that clearly have a "summer time vibe.” We get to make that come to life in a video like "Likkle Bit.” It's funny, though, a lot of people ask us how we got into it or how a sound with such a tropical vibe can come so far from the ocean, but really, me and all the boys are just into it. We all grew up with it around in some way or another and feel a strong connection to it. There are some bands out there that aim to sound like a certain reggae group or force it, but the progression and way that we came to be a reggae band was very natural and just continues to grow. I believe that this music can come from anyone and anywhere if the recipe is right, and for us, it's just the perfect mixture.

What do you hope reggae and roots rock fans come to understand about the Midwest scene?

Joel: I just think that if they give us a listen, they will find it's just as good and legit as many of the others out there. One of America's first reggae bands came from right here in Kansas City. They are called The Blue Riddim Band and still play even today. Josh Heinrichs along with his old band Jah Roots put thousands of people on to reggae in the Midwest, and Josh still continues to do it to this day. I think people are catching on to it. I just hope that the Midwest catches on a little more! 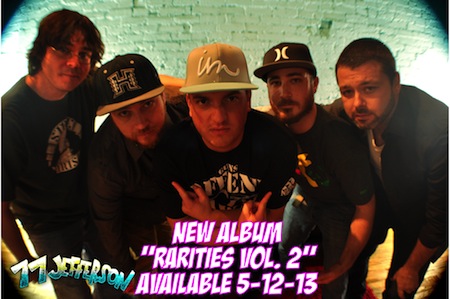 For fans less familiar with 77 Jefferson, share some about how the band came together and what propels you to keep generating new material together?

Joel: Well, 77 Jefferson was formed in July of 2006 in Kansas City on 77th and Jefferson - crazy right! And, it was me (Joel Castillo, lead vocals/guitar), my brother Ryan (drums/vocals), Miles Brown (guitar/vocals), and Mike Dunn (bass). We weren't trying to be a reggae band; it just so happened that I had written a few reggae songs, and we started to put them together. But, really we were just jamming and having a good time at first. It wasn't till we started to get material together and record that we realized we had something. A few years, albums, band members, and crazy stories later, we are still putting out music and, to be honest, are more excited about the future than ever. Getting Justin and Kyle last year and adding 2nd keyboardist Brian Tiemeyer recently…In a way we feel like we're just getting started…I think the love for what we are doing is what propels us to keep on pushing out material. It's just a way of life now, and we love it...

Following the highly successful release of Truth & Love and achieving a debut at #1 on Amazon.com, you embarked on an extensive North American to