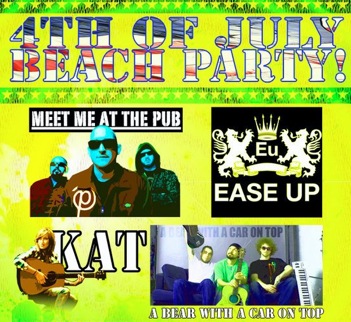 My 4th of July started with a flaming cupcake piñata being hurled off the roof of my 4 story work loft in downtown to a drunken chorus of "America the Beautiful."  I knew it was going to be a good one.  In 12 hours the real party I was waiting for would begin.  Meet Me at the Pub, Ease UP, Sand Section, Kat, my band A Bear With A Car on Top, and possible others were going to be playing at a house right on the beach in Playa Del Rey.  Word on the flyer was 6 kegs, 5 bands and 1 taco truck.

As the party was getting set up, I think the scene could be best described in some dialogue I overheard between one of the party hosts, who was hosing down a slip n slide, and a middle aged woman who had just pitched her lawn chair in the sand:  "Hey your probably gonna wanna move, because we are getting ready for a party, and theres gonna be loud music here, and all that area right there is gonna be the party area where the crowd is gonna be; so what I suggest to you is to move over here more maybe by the volleyball courts or the lifeguard stand."

"No thanks, I got pretty shitty last night I'm trying to keep it cool for now."

Sand Section kicked off the music somewhere around 2pm.  Coming right off their first tour, Sand Section busted out a really tight set.  Their songs have really solid rhythms and the harmonies and alternating lead vocals of Jeff Nisen (Guitar) and Tony Gonella (Bass) come through with perfect balance.  I sat down for a quick interview with Tony before the show:

So how long has Sand Section been around?

We've been around for… I'm gonna say ten years. We've been playing since we were 12 years old, in Sam the drummers garage the entire time. But we got serious last year. So we've really been going at it seriously for about a year.

Where are you guys based out of.
Based in Manhattan beach in Sam's garage.

What changed that got you serious about music?
Well we were all at different colleges the last 4 years and I think about 6 months before graduation we realized the real world sucks man! So we decided to give it a go. I think that was it, no one really had anything lined up so we were just like fuck it let's do it.

Awesome, so who recorded your album, "Truth Over Harmony"?
This guy Billy Clien recorded it over at LMU. He engineered it.

Did you guys do it at the LMU studio? 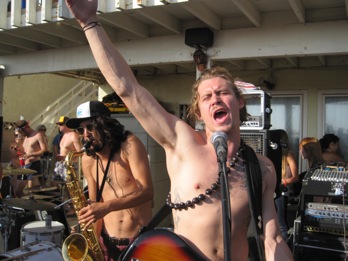 That must have been fun.
Yeah it was sick. We've actually recorded there like 8 or 9 years ago with a different band, but yeah it was good to get back in there and it was all free coz it was his school project so that was sick. And we mastered it at Total Access over in redondo - mixed and mastered it there. It was worth the money for sure. They did a killer job.

And so how have things been going since then?
It's been going good, dude, this last week we embarked on our first tour. It was California; we were up in Roseville and Tahoe, SLO, santa barbara, down in san diego and all over the place and it was good, it was successful. So I think at this point its just all about putting in the hours and playing the little shows to nobody, playing the shows to a bunch of people, its just getting the music out there to people. So Yeah, we are stoked and we are giving out album away on a donation basis. Thats been really cool because sometimes you'll get 25 bucks for a cd, sometimes people take it for free and thats fine, whatever, its just getting it out there.

Cool, so anything to add?
Go check out Jeff's blog on sandsectionmusic.com its pretty funny.

After Sand Section it was time for my band, "A Bear With A Car On Top," to play.  It was really awesome getting to play on the beach.  The open sky, the fresh air, the sand, the waves, all inspired us to open up with a psychedelic reggae rock jam and when I stepped up to the mic, freestyle flows exploded on the bikini clad crowd like the whip cream in the end of the Katy Perry video "California Girls".  Ok,  after watching the video again that might have been a bit of an overstatement.

At this point the video camera ran out of batteries.  I admit, better planning could have prevented this, but mistakes are made when partying is a priority.  I did however, get audio from the next couple bands before my card finally filled up on my Boss Micro BR digital recorder.

The next band was "<span style="fo