I would like to ask first about your recent summer outing on the “Surf Roots Tour”. Talk about how it went and some of your favorite stops on the trek.

The Surf Roots tour was really fun… we concentrated on the West Coast this trip, which is where the majority of our fan base is right now, and being that this was the 2nd time hitting some of these cities in the past year, the turnout was awesome. Our favorite spots would have to have been San Diego, Phoenix, Portland, Seattle, San Francisco, and Las Vegas. "I have tons and tons of lyrics that I'll just write down whenever they come to mind..."

Is The Green your official backing band? Do you have another group to head out on the road with you if they are touring?

The Green boys are like my brothers-- most of us were living together in fact at one point, so its easy to get along and to rehearse. They are my favorite band for sure being that they are so talented musically, so they make me sound so good! When touring is over I have other musicians that I play with cause our schedules usually conflict. I used fellow Surf Roots Tour band Stranger from San Diego to back me at West Beach Music Festival on September 24th. I also play with a collaborative group called Mana Maoli that's backed by Natural Vibrations, and we're all heading to New Zealand to represent Hawaii at the annual Pasifika Festival in March 2011.

You have a great deal of motivation, drive, and passion as a musician; you even decided to leave film school to follow your true dream. What were some of the biggest obstacles you faced upon making that decision?
Big obstacles were things like my grandparents not approving of leaving college, financial issues from giving up a night of work to do a gig for peanuts, the constant struggle to stay motivated when you're feeling like, what am I doing? But luckily I somehow persevered and had the patience and faith that this is the life that I want.

Being a songwriter your notepad must always be full. I would think you have a huge catalogue of lyrics. Is it possible for you to release multiple albums in a year?

Actually I really really take my time with a song. I have tons and tons of lyrics that I'll just write down whenever they come to mind, or on that notepad on my iPhone, but as far as making them a complete song, beginning middle and end, I really put time into it (usually…sometimes they'll just flow too easy). But I've been getting very inspired lately and I'm sure I will be later in life as well as things change, so who's to say what will happen. If it does, it does.

One of my favorite songs on your previous self-titled album is “Barista By Day”, simply because of the honesty and truth felt in that song. It must feel great to be a singer because you can really vent about so much.
Yes its great to be able to validate your feelings by making a song about it. Its really helpful, its like therapy.

The album also features a song Rumors with one of my favorites Dog Boy. I am curious on how you two got together for this collaboration?
Robby aka DogBoy and I met through my producer Drew K in LA when I was recording the album. He wanted to introduce me to some people I may be able to collab or songwriter with. Dogboy has been in the game for years, playing with Too Rude, touring with Kottonmouth Kings, and was all up in the old school Cali rock ska punk reggae scene which is music that I love. We got along super good and "Rumors" was written in one night us just rapping about something I was going on with a boy at home at the time we recorded it. He's awesome. 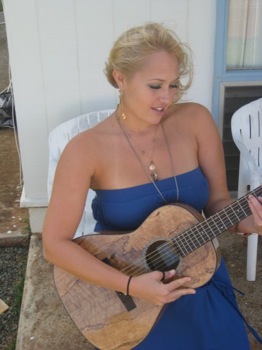 Who are some other artists you would like to work with in the future for later albums, I personally would hope for Pepper?
Hey, great idea! I want to work with Bruno Mars. He's a Hawaii boy doing big things and is an incredible songwriter and performer. Pepper would be sick! Jack Johnson I'd love to write with him, maybe like The Green or Iration, SOJA or some other popular reggae band, and I'd be AMPED on Nikki Minaj! She's is the truth!

How did it feel at the recent Kokua Festival when you went up on stage to perform Mudfootball with one of your favorites, Jack Johnson?
It felt unreal. I remembered to capture every second in my brain as it was happening, looking out at the sold out crowd, the way Jack sounded in my monitors, everything. It was one of those moments you gotta stop and slow down and realize that you're achieving the impossible.

Please name some of the artists on the island of Hawaii that are in your music player right now?
As far as Hawaii artists, I listen to the radio mostly for my local music. Some of my faces The Green, J-Boog, Fiji, Micah G, Kimie, Natural Vibrations, Kalapana, Na Leo, Ka'au Crater Boys...

What does the rest of the year look like for Anuhea?
I'll be in the studio recording songs for my next album. First session is next week. I'm hoping to release an EP by the years end or full album (depending on how it flows) by first quarter of 2011. I can't wait to share my new songs with everyone, its like going back to school after a summer of fun! I'm also planning a series of shows in Hawaii that I'm calling Quarterlife Crisis tour. It'll kind of be my version of Kokua Festival since I'm trying to start my scholarship program and the Anuhea Cares Foundation, so going to be busy getting that done. I'l